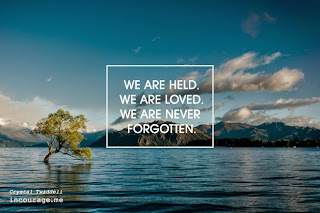 I was having a particularly stressful day at work. Many things just weren't going well. And I was having a hard time keeping my cool.
Then it happened. I was told that I was being "watched".
At first I wasn't really sure how to take this. Had my stressful situation brought out something in me that it shouldn't have?
The woman stood in front of me and continued her statement.
"You know I've been watching you."
Oh boy, I thought. Here it comes. What kind of explanation shall I give her????

But what she said next nearly floored me.
"I can tell this is not just a job for you. You really care."

I had to hold back the tears that started forming in my eyes.

You see I'm a nurse. And right there amidst all the chaos of stress and call lights blinking with not enough staff to answer them, God sent me a message.

God has a plan for every single part of our lives. And if we are smart enough to follow HIS lead, then His Will will never take us where His Grace will not keep us.

Psalms 29:11 says, "The Lord will give strength unto His people. He will bless His people with peace."

Are you where He wants you to be today? Remember, He is watching.

Praise and Worship are your mightiest weapons 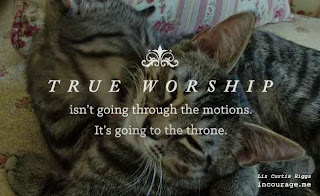 I was overwhelmed by what what was going on. I didn't understand it. I didn't know what to do about it. And it was eating me alive. I tried to occupy my mind with watching endless movies and with work. Anything so that I could 'just not think about it' . I felt helpless, under attack, like an army was waiting for me on the other side of the mountain to destroy me.

And then a friend said to me, "I beleive that you have a gift for worship. And in your worship you will find your strength, and your breakthrough."
So I began to worship in earnest. And everything changed.

2 Chronicles chapter 20 tells us a story that at the onset seems like a dire situation. 3 different armies had joined forces to come against the people of God. They were coming to destroy them. They were just on the other side of the mountain.....
But when Jehoshaphat heard about the imminent danger, instead of 'occupying his mind' with distraction so he didn't have to think about it, he "inquired of The Lord" (vs 3)
He said "we don't know what to do Lord, but our eyes are on you!"

When God spoke to him he said, "Dont be afraid or discouraged because of this vast army! The battle isn't yours! It's mine!"

And they all began to worship and praise in very loud voices. As they sang and praised, the enemies that were coming to destroy them ended up destroying each other. And when God's people arrived on the other side of that mountain, instead of finding a battle to fight, all they found were dead bodies.
So they praised and worshipped some more!

Your battlefield like mine may not be physical but spiritual. Your place of worship may be like mine, the kitchen, the living room, or in your car.
If anyone is watching me on a daily basis, they may think I'm a little crazy, as I walk around hands raised, singing and shouting loudly at the enemy.....

But when I arrived ar the other side of my mountain, all that was there were dead bodies.

The Bible tells us to be anxious for NOTHING!!! (Without exception) but in EVERYTHING with thanksgiving, (praise and worship) let your requests be made known to God.  Loudly. Forcefully. Mean it! Do it on purpose!!! With purpose! (Phil 4:6)

It's not easy to do sometimes. A lot of times. But God honors us with His presence and His gifts when we bring the sacrifice of praise. He delights in the praises of His people. He enjoys us.

As you are worshiping, God is causing your enemy to be destroyed. He is fighting your battle. And when you come over the top of your mountain, all you're gonna see are the dead bodies.

If you come to my house, and you are always welcome, there will always be praise and worship on in the background.

Use your weapons my friend!

My husband and I just moved. New house, new town, new job, new church, new circumstances, new experience.....
It's all still unfamiliar, a little bewildering, and specially for my husband, a little unsure regarding our future. It's the starting point for our "Emmaus walk"

Luke chapter 24 tells us a very enthralling story. Jesus had been crucified, and had died a horrible suffering death. The two men walking on the road to Emmaus were still reeling in the sight of it, still trying to understand all they had seen. They were talking about it when another man joined them not only in walking, but also in their conversation. They didn't know this man was Jesus until the end of their journey. This story begins with disbelief and sadness, but ends with joy, excitement, love, and true devotion. Why? Because Jesus had made himself KNOWN to them! He had opened their eyes, their hearts, and their minds to the reality that He was alive! And that all He had said to them was true! He equipped them and let them know it was time to move forward, to live in their NOW, and they did it with joy and excitement.

Our journey must also be in the "NOW". Moving forward. No matter what has happened in your past, whether it was trial or glory, Jesus is taking us on our Now Emmaus road. He wants to tell us something new, something different. Something thrilling! And He wants to walk right there beside us. Seeing our expressions of joy. Holding us up when we are weary, and sad. Never letting us be alone.

Have your problems and disappointments kept you from seeing Jesus right beside you? Ask Him today for a fresh Emmaus Road encounter. One that will cause you to look forward to a future bright with hope and excitement about eternal possibilities through Him!

The new NOW in your life will be the beginning of all the answers you are searching for. It will put you on the walk that will lead you home. And no matter how your walk begins, if you walk with the realization that Jesus is walking with you, then your walk will always end in joy.

Be sure and read the story for yourself! And let me know what you think!

Who's holding your arms up?

Just blow your trumpets all ready.

I can just see the faces of the Israelites. "God said He wants us to do what?"

And I can clearly imagine Joshua, after hearing from God and thinking about all His strange instructions regarding the Jericho wall. "Why don't you just knock them down today Lord? Why do we have to walk around in circles and blow trumpets and carry the ark around? It's pretty heavy! And these people are gonna be staring at us over this walk laughing at us!"

In case you don't know the story, Joshua and the Israelites had reached the Jericho wall. Evidently it was one strong wall! No army had ever penetrated it with any of their might or weapons. But Jericho was part of the land that had been promised to God's people.  Instead of just giving them the land immediately, God instructed them to do a specific set of things that included marching around the city for seven days, blowing trumpets, and then shouting. (Curious? Read all about it in the book of Joshua!)

It just didn't make sense. Certainly God could have knocked down the walls at any time. But what He wanted from them was simple obedience. And when they obeyed, God did something that was so miraculous it blew their sandals off!!!

Faith and obedience go hand in hand. If we are going to have faith to believe that God is going to do what He said He would, then we have to do our part. "If you love Me, you will keep My commands....."

Very often it doesn't make sense. You look at the numbers and know you don't have enough money to pay the bills. Then you hear God's voice telling you to give your money to someone else. Your first reaction is "But Lord! Why?" Then you rationalize. "If I do that I won't be able to pay my bills!"

But then you do what He asks, and miraculously you have the money to pay all your bills.

God is always at work in our lives. Teaching is, growing us, challenging us in our faith. What He requires of us is really very simple. And no, it often makes no sense. But the outcome is always amazing!

What have you asked God for today? What has He promised you? Are you willing to do what He asks? And blow your trumpet all ready?

Leave a comment and let me know what God has done for you!!!

When you get a headache, what's the first thing you do? Reach for excedrin? Or pray? Which should you do?
I'll leave it to you to decide. But let me pose to you another question. Do you think a headache is too small a problem to bother Jesus with??? Maybe you're going to wait to pray for healing when you're diagnosed with cancer?

"One of the most critical reasons believers experience defeat is because we catagorize only a few areas of our lives as Christs arena! Many believers think Jesus jurisdiction doesn't extend into certain areas. Many don't even get out of the church parking lot with Him on Sunday. As if to save Him the extra trouble of dealing with things that they feel don't concern Him, they leave Jesus at church to deal with areas related to His expertise.
satan is greatly defeated when we start living our lives based on the truth that EVERY area is Jeaus Specialty!!!!"

Yes children of God! His specialties are all things! We don't have to wait for a major crisis, or a life threatening illness to call upon Him! As a matter of fact, Jesus is waiting patiently on a daily basis for you to talk to Him about everything.